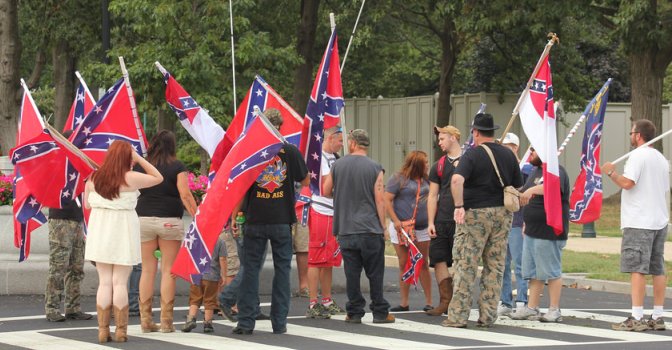 REALITY—Alabama and Mississippi were both still celebrating “Confederate Memorial day” as a state holiday in 2017.

Many of the people who still cling to Confederate imagery insist it is a source of heritage, rather than the symbol of a brief failed attempt to shatter the union and codify white supremacy that it is, will, with a confidence matched by and owed to their ignorance, talk down to others and compel them to study the history of the Confederacy.

When confronting these lost souls on the nature of their so-called heritage, arm yourself with this one quote from Confederate Vice President Alexander Stephens’ “Cornerstone Speech.”

“Our new government is founded upon exactly the opposite idea; its foundations are laid, its corner- stone rests, upon the great truth that the negro is not equal to the white man; that slavery subordination to the superior race is his natural and normal condition. This, our new government, is the first, in the history of the world, based upon this great physical, philosophical, and moral truth. This truth has been slow in the process of its development, like all other truths in the various departments of science. It has been so even amongst us. Many who hear me, perhaps, can recollect well, that this truth was not generally admitted, even within their day. The errors of the past generation still clung to many as late as twenty years ago. Those at the North, who still cling to these errors, with a zeal above knowledge, we justly denominate fanatics. “