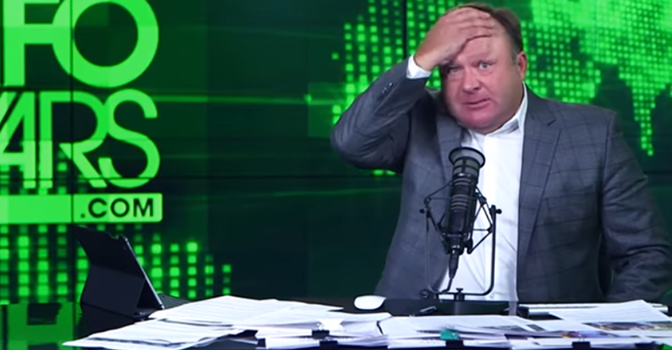 Alex Jones’ lawyer made a case for her client today which insisted that the mother of Jones’ three children had been replaced by a lizard person.

The lawyer, Kimberly Trell, made news yesterday after it was revealed that she claimed Jones was merely playing a character in his role at the head of the conspiracy theory media outlet InfoWars.

The “bullshit artist” legal defense was promptly shattered by Jones who streamed a live video insisting his persona was real, seeming to signal that the comic manifestation of his absurd ideology was more important than custody rights of his own children.

In a defense pivot, Trell decided to tactically embrace the chaos presented by Jones’ instability and is now insisting that Jones’ wife has been replaced by a lizard person.

“It is abundantly clear that the New World Order has replaced my client’s wife with a lizard person in an attempt to undermine his growing influence,” said Trell. “What’s more, we have reason to believe that all three of Mr. Jones’ children have also been replaced. Nevertheless, Jones seeks full custody of the lizard children so that he may put them down personally.”

Hollywood Hulk Hogan did not respond to Stubhill News’ requests for comment.

At press time, chemicals in the water were turning the friggin’ frogs gay.