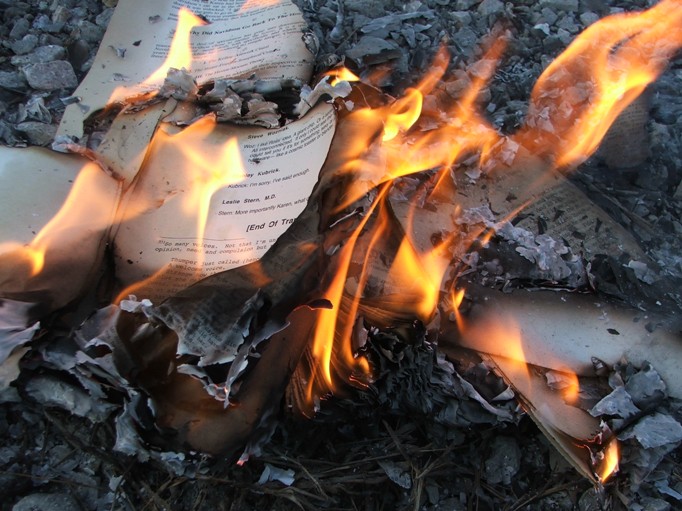 CAMBRIDGE—In a recent joint-study between Harvard University and Burns & Noble has revealed that the majority of books are purchased not for reading, but burning.

“Not many people read paper books anymore,” the paper states, “the only good reason to have have a physical copy in your hand for the satisfaction of destroying it.”

The study shows that most people smart enough to read books are saving money and space in their homes by purchasing digital copies. However, this method proves difficult for book burning.

Stubhill News sat down with the Right Rev Raymond Bradbury who explained that the best way to show the wrath of the LORD is through a “good ol’ fashion book burnin’!”

“Ya see, them dang phones is too ‘spensive to smash or burn,” said Bradbury. “We also find it non-climactic to delete them dang books from those damned Dell Devils!”

Ben Curtis, a technological anthropologist from Prestigious University, informed Stubhill that “Dell” was an archaic form of personal computing.

In 2014, 75% of paper book sales were burned within 24 hours. Of that number, nearly 40% of these books were non-Christian religious literature, 20% were of Harry Potter and school reading lists, and the remaining 20% were strictly copies of Goodnight Moon.

Dan Brown, the CEO of Burns & Noble, expressed an eagerness to appeal to the book-burning demographic as 2014 was the most successful year the company has had in over 5 years.

“This is a trend in the market and it would be bad business not to embrace it,” said Brown.

CEO of Amazon, Jeff Bozos, said they will also cater to this growing demographic and plans to incorporate the use of drones to streamline the process.

“We have been really excited to have 30-minute drone delivery of any order,” said Bozos. “We have decided to add the option for the drone to drop deliveries directly into the fire to allow for a more consistent distribution within the pile to allow for a more sustained burn.”

“Initially we were researching a method of delivering pre-lit books via hellfire missiles in order to maximize speed convenience for the customer, but the FAA is full of draconian nanny statists,” Bozos added while waving a Gadsden Flag.

Follow Stubhill News or feel the wrath of the LORD.