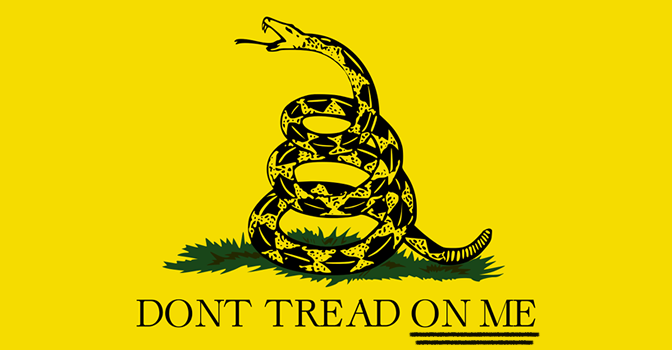 A group of local Gadsden flag owners want to address society about what their chosen symbol means to them.

The Gadsden flag is a revolutionary flag named after its designer, American general Christopher Gadsden.

Over the years the flag has been hoisted by U.S. proponents of liberty.

Recently it was a chosen symbol of libertarians, a group of ideological purists opposed to treading of the governmental variety.

Even more recently it has become a chosen symbol for social conservatives who are kinda against government spending, but not really.

“It’s ain’t so much the treadin’ that we is concerned with as much as it is where the treadin’ occurs,” said Billy-Jim Joe-John Randall IV, Esq. “We are really fine with banning lot of things, and will almost always favor state officials in any matter where force is involved.”

Randall insisted that it was important that his flag didn’t mean to him what it means to the general public.

Many have begun to underline the “on me” portion of the flag in order to better communicate its meaning.

“Anyone who thinks that flag opposes all forms of treading needs to read a history book,” said Randall.