Set your DVR, because President Obama has vowed to use the N-Word again.

Obama made the announcement after appearing on Marc Maron’s WTF podcast earlier this week.

“After using the N-word on the Podcast, that was all people could talk about.” Obama said. “Suddenly the TPP, job numbers, Benghazi…all gone. No one cared.”

Obama expressed regret over using the N-word on a Podcast instead of a real national broadcast where it would have gotten more exposure.

“I really blew it when (Bill) O’Reilly interviewed me during the Super Bowl, that would’ve been sweet. everybody was watching,” Obama exclaimed, visibly giddy.

“You live and you learn,” Obama said. “And let me be clear, this is not a mistake I will make again; from now on prime time is N-word time.”

The event has sparked other presidential hopefuls to consider generating publicity with racially charged language.

Ted Cruz announced he will be building an exploratory committee on whether he should say the S-word or the WB-word.

According to Donald Trump, Obama stole the idea from the Trump campaign.

“I don’t know if he’s been spying on me or what, I’m just asking questions, but I think this is just another abuse of executive power and that my private meetings have been compromised,” Trump said. “All I know is I’ve been calling those people that word for years and it’s a little suspicious that after six years in the office that the President would decide to finally come out and say it so soon after my candidacy announcement. It’s not right. I bought the rights to that word.” 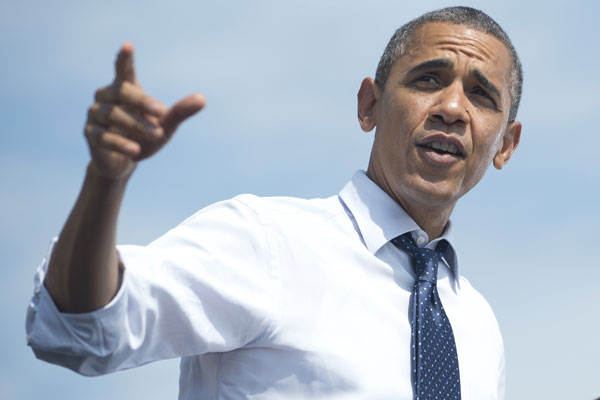 Obama thinking about saying the N-word

Congressional leadership was uncharacteristically pleased with the President’s announcement.

“For the last 6 and-a-half years this president has done nothing but divide the country and he refused to work with the Republicans,” House Speaker John Boehner said. “Finally he is saying something we can all agree on. He is going to say ‘n****r.”