The Make-A-Wish Foundation, a non-profit organization that grants wishes to children afflicted with life-threatening conditions, announced today that it had mistakenly granted the wish of infinite wishes to 7-year-old Damien Thorn.

“We have a strict protocol that was supposed to prevent this from ever happening, but somewhere along the line the system  must have failed,” said David A. Williams, the president of the foundation. 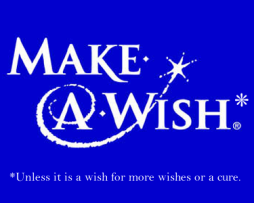 After the infinite wish was granted Thorn apparently wasted no time before wishing that his cancer be cured, but it wasn’t much longer before he began to recognize the full capacity of his wishes.

“The little bastard is now immortal, the richest person in the world, can eat ice cream for dinner, and no longer has a bedtime,” said Williams.

According to Williams, our best shot at survival has already used his one wish.