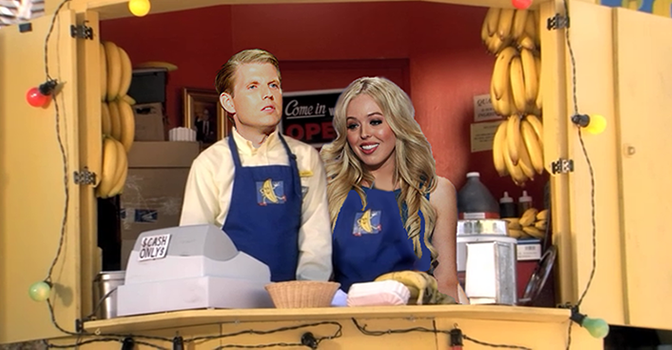 NEW YORK CITY—In the midst of President-elect Donald Trump’s discussions of leaving his business to family members instead of a blind trust, the first formal decision made was to put Eric and Tiffany Trump in charge of his famous frozen banana stand.

Eric Trump was initially frustrated with the decision, but was assured by his father that the title of “Mr. Manager” would look good to future employers and that “there’s always money in the banana stand.”

Donald Trump himself inherited the banana stand from his late father.

Donald Trump never worked the stand, but often made his brothers serve him a free double order of what he affectionately refers to as”The Donald,” according to his smash biography “I’m Incredibly Rich.”

It’s believed this is where he got his nickname from, according to leading banana science expert Professor Dawn Kéykong.

“This banana stand is the crown jewel of the Trump Empire,” said Kéykong. “It’s estimated net worth doesn’t actually make any sense, but that is typical of Trump assets.”

At press time, a very angry Tiffany Trump was asking her father how flammable frozen bananas are.